There isn’t actually a limit on the amount you can save in pension schemes, but the Lifetime Allowance (LTA) is the effective cap for the tax benefits of using pensions for retirement planning. Over time the LTA cap has been systematically reduced and is currently sitting at £1.03 million. It does seem to be an easy tax revenue target for HMRC.

There is no immediate charge if your pension fund exceeds the LTA and it is calculated on specific events, namely; when you take pension income, at age 75 and when you die. Exceeding it will result in a tax charge of 25% of any amount above the allowance taken as regular income, or 55% if it’s withdrawn as a lump sum.

As we’ve alluded to, the LTA used to be much more generous. You can see in the graph below; over the last ten years, the allowance has been quite consistently chipped at, from its peak of £1.8 million 2010/11 to a low of £1 million 2016/17. With Government consistently vocal about the significance of saving towards retirement, this does feel a little hypocritical. 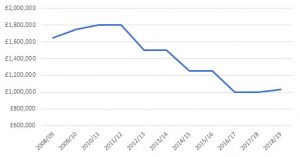 HMRC have tried to soften the blow by introducing various protections to historical allowances, which quite frankly, are complicated. Nevertheless, as a high earner, they are likely to affect your retirement planning. To choose and implement the most appropriate protection for you (whilst they still exist, as HMRC does have a habit of changing these rules), we strongly recommend you get in touch with one of our Chartered financial planners.

As a senior executive, the £1.03 LTA could be exceeded quicker than you realise; after all, we have experienced a near ten-year bull run in the markets. A current pension fund of £750,000 for a working professional could easily exceed the LTA if current trends continue. Also, consider the accumulated effect of pensions from previous employment; keeping track of your portfolio’s exact value may be a challenge in itself.

We’ve not even taken in to account the income of a Defined Benefit or Final Salary scheme yet; to represent Defined Benefit schemes for the LTA you multiply the annual income it will provide by a standard valuation factor of 20:1. Therefore, a £51,500 income would meet the £1.03 million cap alone. A high Cash Equivalent Transfer Value would also pose a similar issue, on the occasions it is appropriate to transfer out of a Defined Benefit pension.

Research has found that the wealthiest 20% of pensioners, equivalent to 840,000 couples, now have an average annual income of £48,672. In order to replicate that income with an Annuity from age 65, Aegon suggests that a couple would need to have a combined pension fund worth £1,031,70; above the LTA for an individual requiring a similar income.

Previous research from the provider found that in order to provide a relatively modest income equivalent to £28,000 from 65, which includes state pension, you would need a pension fund of £612,700; almost 60% of the LTA. It’s clear that for genuine peace of mind and a secure retirement future, effective and efficient financial planning is more relevant than ever.

Very recently the Commons Treasury Select Committee suggested; “The Government should give serious consideration to replacing the Lifetime Allowance with a lower Annual Allowance, introducing a flat rate of relief, and promoting understanding of tax relief as a bonus or additional contribution.”

Widely referred to as a ‘Robin Hood approach’ in the media, the move would penalise higher earners and limit the tax-efficient nature of pension saving even further.

In reality, the likelihood of this coming into effect is slim, but, it’s very important to acknowledge the conclusion a group of cross-party MPs came to. Pension saving does indeed appear to be an easy, and popular, target to increase tax revenue.

The importance of planning

We’ve seen that the LTA is prone to change dramatically, limiting the attractiveness of pensions to fund retirement income. The future may be equally unpredictable; it’s important to make use of the current legislation to the best of your ability.

It may be prudent to build your retirement wealth outside of pensions and the limitations imposed; the current tax-free ISA allowance is £20,000 p.a. per person and should always be utilised if possible. Remember though, investments such as ISAs are subject to Inheritance Tax (IHT) if you die, pensions often are not, which would minimise potential IHT for your beneficiaries.

Having a pension approaching or exceeding the Lifetime Allowance doesn’t mean your retirement planning should stop. In fact, as senior executives, exceeding the Lifetime Allowance might be the best option for you: If you are receiving matched employer contributions the benefit of this might still outweigh additional tax when you ultimately start to make withdrawals in retirement.

Ultimately, it comes down to your circumstances and current arrangements. If you would like to discuss your situation in detail and plan for the future by maximising the current opportunities available, don’t hesitate to get in touch.