In recent weeks there has been plenty of volatility in world stock markets. Both the FTSE 100 and Dow Jones saw their biggest one-day fall since 1987 while there have also been several short rallies.

While most experts would encourage you to be patient if you are investing for the long term, how do markets actually perform over a long period of time?

Naturally, as an investor, you may be worried that such a fall has an impact on your portfolio. However, over the years, there have often been sharp corrections in markets. The chart below shows the calendar-year returns for the FTSE All-Share Index over the past 30 years. 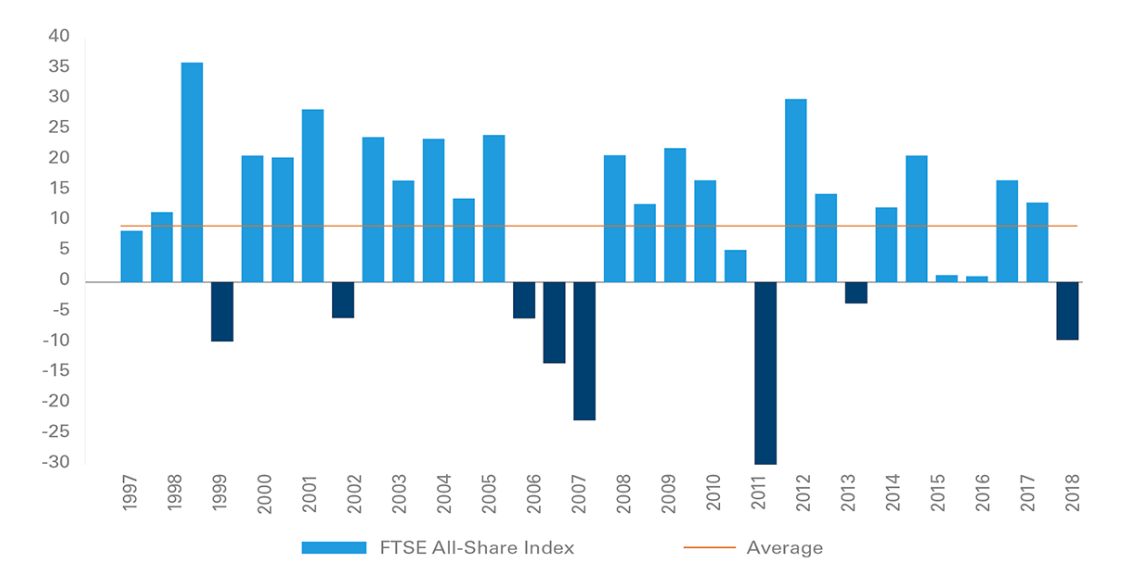 You will see that there have been eight years during this period where returns were negative. However, the average annual return over the whole period is 9.9% – even taking some sharp declines into account.

It’s not just UK equities that have generated a good return over time.

The MSCI World Index has 1,643 constituents and covers approximately 85% of the free float-adjusted market capitalisation across 23 developed market countries including the UK, US, Germany and Japan.

Here’s the annualised returns of the MSCI World Index over one, three, five and ten years, and since its launch at the end of 1987.

Again, this was despite some years where the index showed negative returns. Here’s the annual performance of the MSCI World Index since 2006. 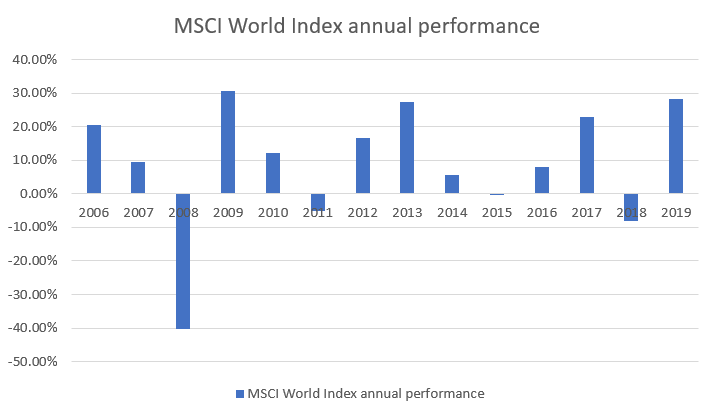 Shares vs other asset classes

So, we’ve seen that, over time, equities in the UK and the world as a whole tend to generate positive returns, despite some short-term corrections. 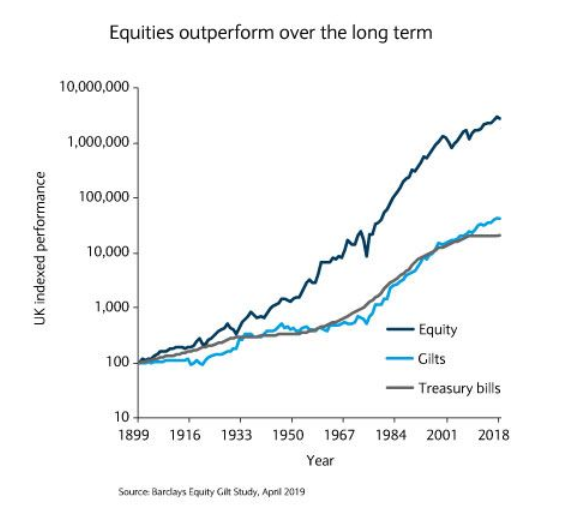 But how do equities compare to other asset classes?

In 2019, the Barclays Equity Gilt Study compared the nominal performance of £100 invested in cash, bonds, or equities between 1899 and 2018.

Source: Bloomberg and Factset and Bank of England, as at 31 December 2019

Again, you will see that the top five returns over this time period were in equities, with US equities leading the way.

UK equities outperformed UK gilts, global bonds and cash over this period, despite a range of market corrections including the burst of the dot.com bubble, the global financial crisis, the European sovereign debt crisis, and the Brexit referendum.

Over recent weeks, you may also have seen talk of ‘bull’ and ‘bear’ markets.

Many commentators have suggested that, after one of the longest ‘bull’ runs in history, we are now entering a ‘bear’ market. With markets falling, you may be concerned about this, but the data shows us that bear markets tend to be short-lived, especially in comparison with bull markets.

The chart below compares bull and bear markets in the UK since 1925. 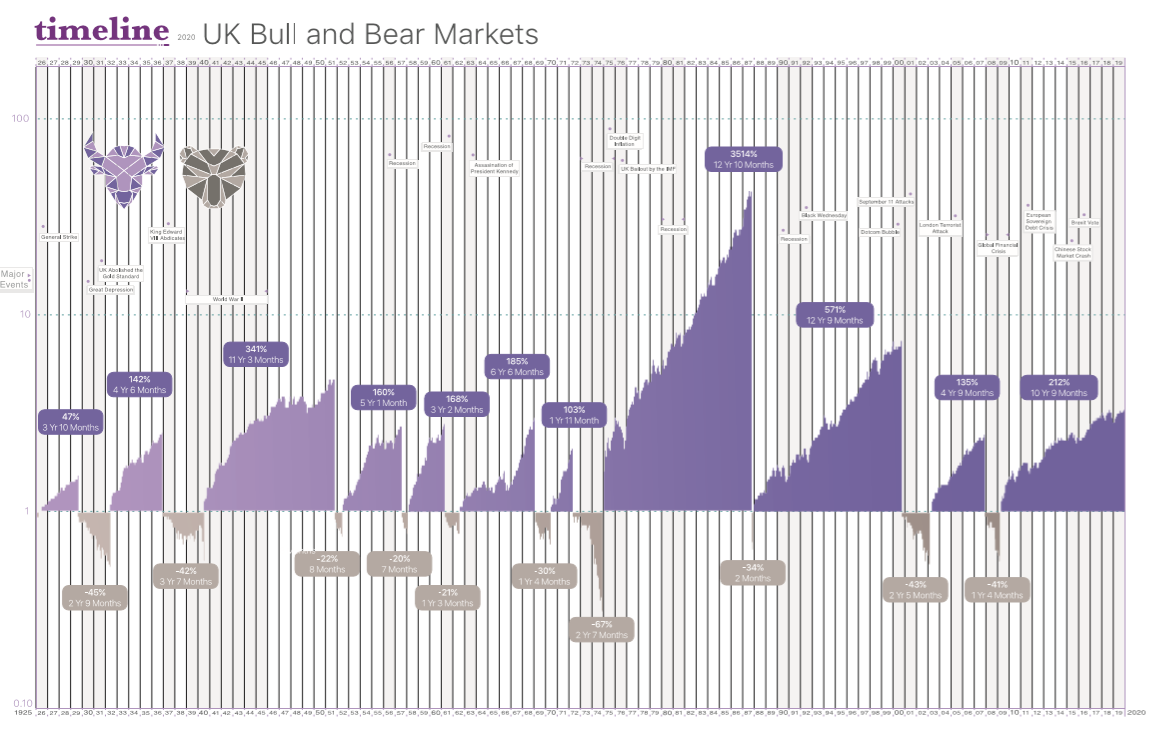 This chart is for illustrative purposes only; it does not constitute investment advice and should not be relied upon as such. The value of investments and the income from them can go down as well as up so you may get back less than you invest. Past performance is not a guide to what might happen in the future. Transaction costs, taxes and inflation reduce investment returns. The portfolios are hypothetical and are re-balanced annually on 1 January. All investment income is assumed to be reinvested, unless otherwise stated. No transaction costs or taxes are included.

You can see clearly from the chart that, while there have been bear markets over the last century or so, they have been relatively short compared to bull markets. Falls in market values have also been outweighed by subsequent growth.

The moral of the story

The investing moral of the story is that you should always remain focused on your long-term goals and ignore short-term market moves. All asset classes fluctuate in value in the short term, but they all tend to produce characteristic returns over the long term.

If you have a good year, great! You may consider rebalancing or selling investments that have performed well and using the proceeds to buy others that haven’t. This ensures you remain in line with the asset allocation that you set at the outset.

And in a bad year? Stay calm. Remember your long-term plan and the reasons why you are invested the way you are.

If you have any queries about the performance of your investments, please get in touch. Email hello@sovereign-ifa.co.uk or call 01454 416 653.

How you can reassure your clients during stock market volatility