To support the economy through the coronavirus pandemic, the government has been forced to come up with an increasingly wide-ranging package of measures.

Plans to borrow £225 billion from bond market investors in just four months have been announced to fund initiatives such as the so-called ‘furlough’ scheme and to provide loans and grants to business.

To compound the problem, the hole in the public finances is also widening as tax receipts fall – indeed receipts were down £2.2 billion in March compared to the same time last year.

All this means that many experts are predicting that taxes could rise dramatically once the pandemic is over. Indeed, the country could see the most significant changes to the tax system since the Second World War, as the government tries to tackle this huge public debt.

Just as in 1945, raising additional taxes is likely to mean a focus on the better off. After World War Two, the government was keen to increase duties without burdening the lower paid, who had shouldered a large share of hardship and fighting – just as it is the lower paid who are on the front line against the coronavirus.

Mel Stride, the Conservative MP who chairs the Commons Treasury committee said: “I think in the taxation debate there will be a very important debate to be had about who should bear the heaviest levels of additional taxation, especially when you think it is the lowest paid and often the youngest people who have been most impacted.”

So, could your clients be facing an increase in their taxes once the pandemic is over?

Wealthy likely to shoulder the burden of additional tax

A leading think tank has called for a range of ‘wealth taxes’ to be introduced after the pandemic in order that people who are better off help to fund the recovery after Covid-19.

Tax Research UK director, Richard Murphy, says that tax rises should be targeted at those with the greatest capacity to pay and that the government has the potential to raise up to £174 billion a year if it taxed wealth at the same rate as income.

Murphy says that taxes should target those people in the top deciles of income earners and wealth owners in the UK. He adds that the effective tax rate for the wealthiest 10% of the population – once income and wealth were combined – was 18%, less than half the 42% tax rate for the bottom 10%.

“This has massive implications for the forthcoming debate on who, if anyone, should pay for the coronavirus crisis,” he says.

“What is clear is that the only fair answer will be that those on the highest incomes, and those with wealth, are the only people who could afford to pick up that bill. If anything, everyone else needs a tax cut just to help them survive. Any politician with any concern for tax justice will have to understand this.”

Rather than introduce a new ‘wealth tax’, Murphy suggests a number of reforms to the tax system that could immediately boost Treasury coffers, including:

Estate Duty in the UK dates back to 1894 and there have been various incarnations of ‘death duty’ over the intervening period.

Estate duty became more progressive in scale, rising to 80% after the Second World War and eventually peaking in 1969 with the highest marginal rate fixed at 85% of amounts in excess of £750,000, provided that total duty did not exceed 80% of the value of the total estate. 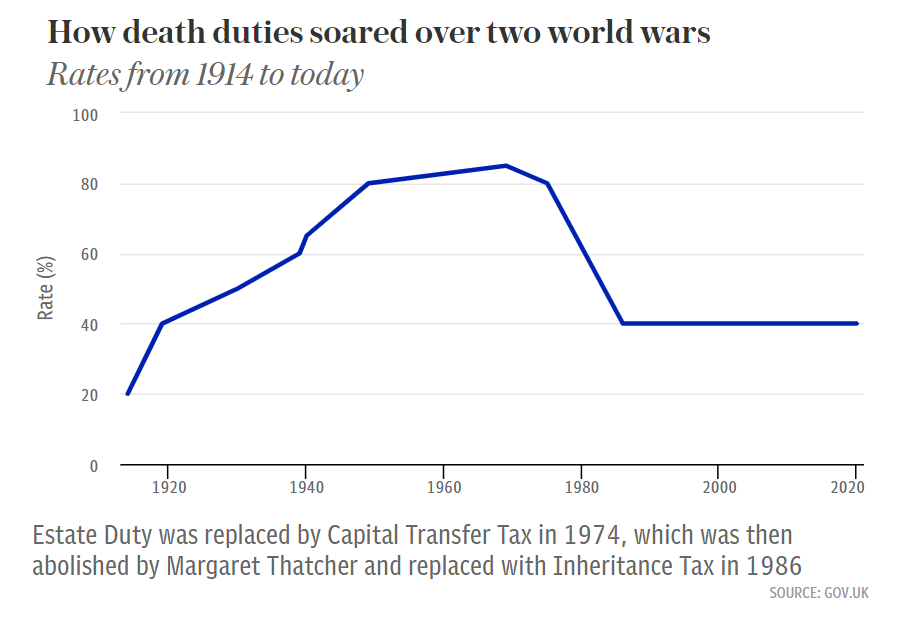 Today, Inheritance Tax stands at 40%. Despite rumours that the Chancellor might reform the tax in his first Budget, no changes were made – although, with billions of pounds of debt to fund, it is likely that some changes to the tax could be made in coming years.

Mike Warburton, the Telegraph‘s tax columnist, said the government was unlikely to increase rates to the levels seen in the 1940s, but said some sort of increase was ‘inevitable’.

However, Sean McCann of insurers NFU Mutual said it was more likely current reliefs, such as being able to pass on unused pension assets tax-free and the ‘seven-year rule’, which exempts gifts survived for seven years or more, would be scrapped to raise extra cash.

Whatever the Chancellor decides, it’s reasonable to expect some changes to Inheritance Tax during this parliament. So, now could be the time for your clients to act in order that they benefit from the reliefs and exemptions currently available.

During the Downing Street press conference when he announced the government’s Self-Employed Income Support Scheme (SEISS), the Chancellor highlighted how the support for self-employed individuals was comparable to employed workers.

The Chancellor said: “If we all want to benefit equally from state support, we must all pay in equally in future. It is just an observation that there is currently an inconsistency in the tax treatment of the employed and self-employed”.

This strongly suggests that self-employed workers may be facing changes to the way they are taxed. Again, it could pay for self-employed clients to take advice now ahead of any possible reforms.

We’re here to advise you and your clients on all aspects of financial planning. If you have clients that would benefit from advice, or you’re interested in how you can work more closely with us, please get in touch. Email hello@sovereign-ifa.co.uk or call 01454 416 653.

Webinar: Coronavirus and your investments