A much-anticipated National Insurance rise will result in an increased burden on both businesses and workers. A Dividend Tax rise will hit company directors and investors. And, for the first time, those above State Pension Age still working will also be hit with a new Health and Social Care Levy.

On top of these tax rises, the government has also suspended the “triple lock”, meaning that your clients in receipt of the State Pension will receive a much more modest increase than anticipated in 2022.

Read on for everything you and your clients need to know about these policy changes.

1. The new “Health and Social Care Levy” will push up National Insurance bills

Despite a clear commitment in their last election manifesto not to raise taxes, the government has unveiled a 1.25 percentage point hike in National Insurance contributions (NICs) from April 2022. This is to raise additional revenue to fund health and social care.

From April 2022, employees will begin to pay the levy through an increase in their National Insurance contributions. The 1.25% increase will also be levied on employers.

This additional contribution will then become a “Health and Social Care Levy” from April 2023 and will appear as a separate deduction on payslips. 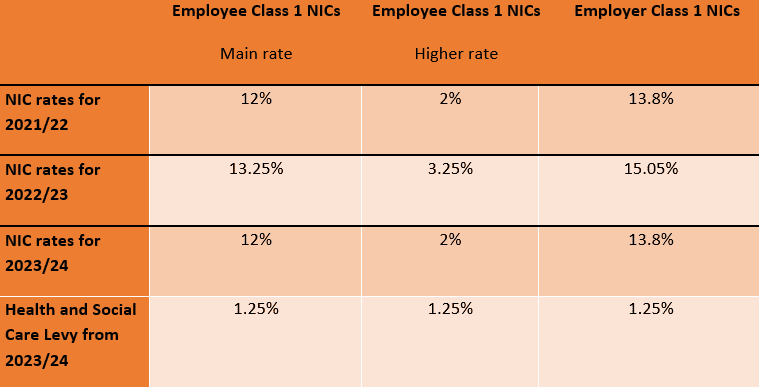 The rise means that, from 2022, both your clients and their business will pay increased NICs. It’s estimated that the new rates will cost employers around £5.7 billion.

While businesses will see a substantial increase in the cost of National Insurance, individuals will also pay more tax.

The government says that, for the next three years, the tax increase will generate an additional £12 billion a year for health and social care. Of this, they have earmarked £5.4 billion over the period specifically for social care, with another £8.9 billion going on what is termed a “health-based Covid response”.

Once the NHS backlog starts to clear, ministers say that more of the money will go to social care, although how this will happen has not been set out.

Alongside the National Insurance rise, Dividend Tax rates will also increase by 1.25% from April 2022. This change will mostly affect investors and business owners.

If your clients take home more than £2,000 a year in dividends, they will face a slightly higher bill regardless of their Income Tax band.

For example, if you have a client who is a basic-rate taxpayer receiving £3,000 in dividends, their bill will rise from £75 to £87.50 once the tax increase comes into effect.

3. 1 million working pensioners will pay an additional tax for the first time

In another radical reform, from 2023 around 1 million working pensioners will pay an additional tax on their earnings.

Under the current system, taxpayers stop making National Insurance contributions when they reach 66, the point at which the State Pension kicks in.

If you have clients over the age of 66 that still work, they will be required to pay the Health and Social Care Levy from April 2023.

The Telegraph reports that a working pensioner earning £60,000 a year will go from paying nothing to paying £630 a year on top of Income Tax.

4. The government has proposed a cap on lifetime social care costs

Currently in England, if a client has assets worth more than £23,250 then they must pay for their social care and there is no cap on the costs.

Under the new proposals, anyone with assets below £20,000 will not have to pay anything towards their care. Those with assets from £20,000 to £100,000 and above will have to contribute, on a sliding scale. This depends on contributions from local authorities, which deliver much of social care.

Clients in this bracket will not contribute more than 20% of their assets each year and, once their assets are worth less than £20,000, they would pay nothing more. However, they might still contribute from any income they receive.

Those with assets above the £100,000 threshold must meet all fees until the value of their assets fall below this amount.

Boris Johnson also announced a lifetime social care “cap” of £86,000, meaning that no individual will be asked to pay more than this sum for care in their lifetime.

It’s important to remind clients that this £86,000 cap will cover only so-called “personal care”, such as help with washing and eating. Living expenses, such as food, rent and energy bills – charges known as “non-personal care” – will not be included.

5. The government will suspend the State Pension triple lock for one year

In a move designed to save the government around £8 billion a year, work and pensions secretary, Thérèse Coffey, broke a second manifesto commitment by announcing that she was suspending the State Pension triple lock for one year.

She told the House of Commons that sticking to the triple lock – which promises that the State Pension will rise by the highest of inflation, earnings, or 2.5% – would be unfair, given that wages were increasing at a rate of well over 8% a year.

The distortion to national average earnings has been caused by the pandemic, as earnings fell at the start of the first lockdown before rising sharply as the furlough scheme ended. Had the government stuck to its commitment, pensioners would have expected an increase of between 8% and 9%.

If you have clients in receipt of the State Pension, they can expect a modest rise in 2022. The rise will be the greater of 2.5% or price inflation, and so all eyes will be on the inflation figure to determine how much the State Pension will rise next April.

If you have any questions about how the National Insurance increase, Dividend Tax rise, or triple lock suspension will affect your clients, please get in touch.

Alternatively, if you have clients that would benefit from advice, or you’re interested in how you can work more closely with us, please get in touch. Email hello@sovereign-ifa.co.uk or call 01454 416 653.

This article is for information only. Please do not act based on anything you might read in this article. All contents are based on our understanding of HMRC legislation, which is subject to change.

Everything you need to know about the 2021 Autumn Budget

With changes to the State Pension on the horizon, here’s why you should act quickly to get the full amount you deserve