If you’re an investor, 2020 is likely to have been one of the most tumultuous years in recent memory. As coronavirus reached Europe early in the spring, global markets began to wobble, and strict national lockdowns sent indices across the world into meltdown.

Indeed, in mid-March, the FTSE 100 experienced its biggest one-day fall since 1987. Since then, as you can see from the chart below, it’s been a volatile year, with sharp daily rises and falls.

While there has been some recovery in the summer and autumn – the index is up more than 1,000 points on its March low – it still sits below the level it was at when 2020 began.

Volatility in the markets can teach us some valuable lessons about investing, so read about the five things we’ve learned from 2020.

1. It’s important to focus on the long term

As we have seen this year, stock markets can rise and fall sharply – even over the course of just a few hours. The lesson we need to learn from 2020, though, is that equities tend to generate positive returns, despite some short-term corrections. 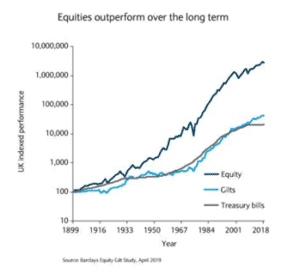 In 2019, the Barclays Equity Gilt Study compared the nominal performance of £100 invested in cash, bonds, or equities between 1899 and 2018.

In the US, the Dow Jones closed on 24 November at its highest level in 2020. Investors who didn’t panic, and stayed patient, were rewarded as the index hit a record high.

2. We need to be aware of our emotions

Earlier in the year, we looked at the theory of ‘loss aversion’ and how this can affect investment decisions.

This theory of loss aversion suggests that, for individuals, the pain of losing is psychologically twice as powerful as the pleasure of gaining.

As a result of this, people who face the prospect of making a choice, such as an investment decision, typically have a stronger preference for avoiding possible losses than for making gains. The theory demonstrates that individuals are willing to give up more potential profit to protect themselves against loss.

When markets are volatile, it is easy to be affected by this and other emotional biases. Knee-jerk reactions can damage your long-term plans (consider the above example of selling at the bottom of the market in 2020).

Working with a financial planner can help here. Your planner can act as a sounding board, helping you to avoid making decisions based on emotions and psychological biases, and encouraging you to stick to your long-term plans.

There’s an old saying: “it’s time in the markets, not timing the markets, that matters.” Essentially, it means that it pays to remain invested rather than trying to time the market by predicting the peaks and troughs.

During 2020, you may have been tempted to retreat to safer assets and to exit the markets. However, the chart below shows that spending time out of the markets can have a significant effect on your long-term returns. 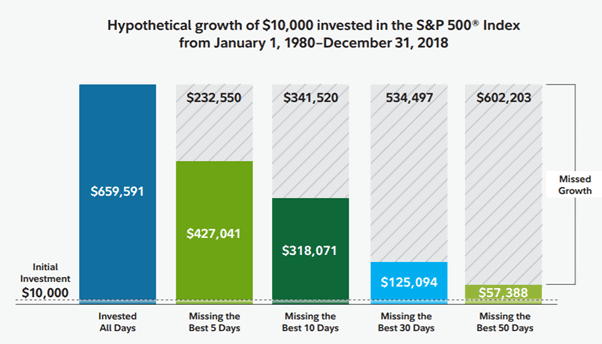 Look again at the example from 2020, if you’d exited the market towards the bottom, you’d have locked in losses and missed out on roughly 30% returns over the next ten weeks or so.

4. The stock market is not the economy

2020 has been an unprecedented year for the global economy. Many countries – including the UK – have experienced their deepest recession since the 1920s and 1930s.

The Office for National Statistics reported that the UK economy shrank by 19.8% in the second quarter of 2020, officially pushing the country into a recession after a decline of 2.5% in the first three months of the year.

Despite the world experiencing its worst economic contraction since the Great Depression, most global stock markets have seen growth.

The Dow Jones Industrial Average and S&P 500 have risen by more than 50% since hitting the bottom in March. The FTSE has also gained more than 1,000 points from its March low.

What has become clear this year is that the stock market is not the economy. In fact, the two seem to have become more divorced in recent months than ever before. So, if the world is in the biggest recession for 90 years, why are stock markets rising?

In a perverse way, financial advice often adds more value in difficult times than when the economy is thriving. Navigating choppy economic waters can be difficult, and it’s often helpful to have someone to row your boat with you!

Over the course of this year, there have been several reports which have detailed just how much value working with a financial planner can add.

Vanguard found that while the exact amount may vary depending on client circumstances and implementation, an adviser adds value by:

A separate long-term piece of research by the independent charity and think-tank, the International Longevity Centre (ILC), reinforced the financial value of advice. Their report found that people who received financial advice between 2001 and 2006 were more than £47,000 better off, on average, by 2014/16 than those who took no advice.

And a recent report from insurer Royal London found that working with a financial planner doesn’t just add value in terms of pounds and pence. Their study found that taking professional advice makes you more confident, more secure, and more in control.

In an unprecedented year, our clients have been delighted to have us by their side. If you want to find out more about how financial planning can add value to you, please get in touch. Email hello@sovereign-ifa.co.uk or call us on 01454 416653.

The value of your investment (and any income from them) can go down as well as up and you may not get back the full amount you invested. Past performance is not a reliable indicator of future performance. Investments should be considered over the longer term and should fit in with your overall attitude to risk and financial circumstances.